The Path to Rome 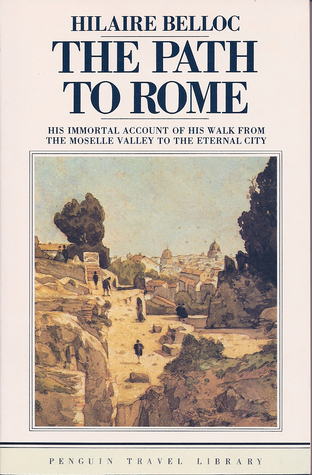 Now after his own dexterous tales, Belloc will introduce us to the hostess of the inn and he will fittingly show us a few of her own pert or feisty exchanges with the middle-class diners:. The hostess of this inn was delicate and courteous to a degree , and [she was] at every point attempting to overreach her guests, who, as regularly as she attacked, countered with astonishing dexterity.

It is really preferable to this local wine. It could not be bettered. Nor could she get around them on a single point, and I pitied her so much that I bought bread and wine off her to console her, and I let her overcharge me , and went out into the afterglow with her benediction , followed also by the farewells of the middle-class, who were now taking their coffee at little tables outside the house. I went hard up the road to Remiremont. The night darkened.

Some time later, while on his demanding hike in the higher mountains with their panoramic views of beauty, Belloc feels somewhat overwhelmed and he admits his fatigue:. I tired of these immensities , and, feeling now my feet more broken that ever , I very slowly and in sharp shoots of pain dragged down the slope towards the main road: I saw just below me the frontier towns of the Prussians , and immediately within them a hut.

To this I addressed myself. It was an inn. The door opened of itself, and I found there a pleasant woman of middle age, but frowning.


She had three daughters, all of great strength, and she was upbraiding them loudly in the German of Alsace and making them scour and scrub. While I was still wondering at this epitome of the French people, and was attempting to combine the French military tradition with the French temper…, the hard-working, God-fearing, and honest woman that governs the little house [inn] and the three great daughters , within a yard of the frontier , and on top of this huge hill, had brought back all her troops into line and had the time to attend to me. This [belated attentiveness to me] she did with the utmost politeness, though cold by race [the Prussian?

She was of a very different sort from that good [Lorraine-rooted] tribe of the Moselle valley beyond the hill; yet she was Catholic — she had a little tree set up before her door for the Corpus Christi : see what religion is, that makes people of utterly different races understand each other; for when I saw that tree I knew precisely where I stood. So once all we Europeans [in Christendom] understood each other, but now we are divided by the worst malignancies of nations and classes , and a man does not so much love his own nation as hate his neighbors, and even the twilight of chivalry is mixed up with a detestable patronage of the poor.

But as I was saying— she also was a Catholic, and I knew myself to be with friends. She was moreover not exactly of—what shall I say? I know most people do not sleep before sunset, but I am particularly tired and broken. She showed me my bed then more kindly …. Belloc will now gradually lead us to consider an unforgettable passage of courtesy and graciousness, after first presenting the situation and then another vivid and laconic exchange:. When I woke up, which was long after dusk , she gave me in the living room of the hut eggs beaten up with ham, and I ate brown bread and said grace.

I drank this with delight , paid my bill which was that of a labourer , and said good-night to them.

In good-nights they had a ceremony; for they all [four of them] rose together and curtsied. Upon my soul I believe such people to be the salt of the earth.


After that gracious and unmistakably touching ceremony, Belloc at once modestly writes:. Then I went to my bed and they to theirs.

The Path to Rome

The wind howled outside; my boots were stiff like wood and I could hardly take them off; my feet were so martyrised that I doubted if I could walk at all on the morrow. The morning outside came living and sharp after the gale—almost chilly. As is usually the case, our Belloc seeks to be fair:. And those who blame the middle-class for their conventions in such [personal] matters, and who profess to be above the care for cleanliness and clothes and social ritual which marks the middle-class, are either anarchists by nature or fools who take what is but an effect of their wealth for a natural virtue….

Of all the corrupting effects of wealth there is none worse than this, that it makes the wealthy and their parasites in some way divine, or at least a lovely character of mind, what is nothing but their power of luxurious living. Heaven keep us all from great riches— I mean from very great riches.

The Path to Rome by Hilaire Belloc

Now the middle-class cannot [as of ] afford to buy new clothes whenever they feel inclined, neither can they end up a jaunt by a Turkish bath and a great feast of wine. So their care is always to preserve intact what they happen to have, to exceed in nothing, to study cleanliness, order, decency, sobriety, and a steady temper , and they fence all this round and preserve it in the only way it can be preserved, with conventions [and traditions], and they are quite right.

Here too, even about Prussians, Hilaire Belloc attempts to be both forthright and fair-minded. The second edition of contains a new four-page Preface pp. All future page references will be to this edition, and will be placed in parentheses above in the main body of this essay. Robert Hickson graduated from the U. After one year, he became a U. After tours in Viet Nam and elsewhere in Asia, he taught at the J. He acquired his Ph.

He was then invited to the Air Force Academy for four years as a Professor in the William Simon Chair of Strategy and Culture, teaching in several academic departments. Special Operations Command. Comparative cultural and strategic-historical studies constituted a unifying theme in these various forms of teaching over the years.

Maike Hickson was born and raised in Germany.

The Path to Rome by Hilaire Belloc - Free Ebook

She now lives in the U. Robert Hickson, and they have been blessed with two beautiful children. He finds crosses and small chapels on the mountains. He sees the gentle hospitality of men in pubs and peasant women in serving him breakfast. He buys a good wine that sometimes tastes sour to him in the morning. Bakers, he thinks, are the finest of men because they have to arise so early and thus see the day come to be.

Belloc is adamantly A incarnational, that is, he does not separate the soul and the body. There is much in The Path to Rome about food and wine and sleep, as I have already intimated, almost as if it is all right to be the kind of beings we are. A It is quite clear that the body must be recognized and the soul kept in its place, since a little refreshing food and drink can do so much to make a man.

And even when they appear in the flesh, they usually, in some way obscure but reflectively traceable in us, are controlled by the spirit. Yet, we too are beings with a certain sadness about us. There is ever a poignancy in every work of Belloc, even in his laughter and amusement, of which there is much. A Then let us love one another and laugh.

https://rovilvitosak.ga Let us suffer absurdities, for that is only to suffer one another. But we laugh. We are indeed absurdities. Suffering one another is not merely a suffering; it is also patience, a world full of laughter.

Early in his walk to Rome, to give a further example of his thinking on food, Belloc asks about breakfast. His very way of asking the question is delightful. A I would very much like to know what those who have an answer to everything can say about the food requisite to breakfast? He recalls that Marlowe, Jonson, Shakespeare, and Spenser drank beer for breakfast plus a little bread.

In his French regiment, he remembers, for breakfast they drank black coffee A without sugar, with a cut of a stale piece of bread to go with it. The great French Republicans fought first and ate later. Belloc was also a sailor and ate A nothing for several hours. He continues:. Dogs eat the first thing they come across, cats take a little milk, and gentlemen are accustomed to get up at nine and eat eggs, bacon, kidneys, ham, cold pheasant, toast, coffee, tea, scones, and honey, after which they will boast that their race is the hardiest in the world and ready to beat every fatigue in the pursuit of Empire.

But what rule governs all of this? Why is breakfast different from all other things, so that the Greeks called it the best thing in the world? How amusing is this description of the breakfast of the hearty and hardy English gentleman, with its four meats plus eggs, in pursuit of Empire and oblivious of fatigue!

And what was Greece if not a constant search for precisely A the best thing in the world? For when boys or soldiers or poets, or any other blossoms and prides of nature, are for lying steady in the shade and letting the Mind commune with its Immortal Comrades, up comes Authority busking about and eager as though it were a duty to force the said Mind to burrow and sweat in the matter of this very perishable world, its temporary habitation. A Up, says Authority, A and let me see that Mind of yours doing something practical.

Let me see Him mixing painfully with circumstance, and botching up some Imperfection or other that shall at least be a Reality and not a silly Fantasy. These are profound, if diverting words. The temporary habitation of the mind can be quite pleasant to it. Why worry about anything else?